It was by coincidence that that Traci Medford-Rosow met the subject of her latest book.  Her husband, Joel, was walking the couple’s dogs through their New York City neighborhood when he ran into another dog walker, Kevin Coughlin.  “Kevin was walking his guide dog, Elias, and Joel made a joke and said, ‘Hey, did Elias let you outside by yourself this morning?”  The joke started an interesting conversation between the two where Kevin shared his amazing story.  “Joel suggested that Kevin should write a book, and Kevin replied that he needed to find an author to co-write it with him,” Traci added.  Traci is a best-selling and award winning author in her own right.  She immediately agreed to help Kevin write his story.   The result of the collaboration is “Unblinded: One Man’s Courageous Journey Through Darkness to Sight”. 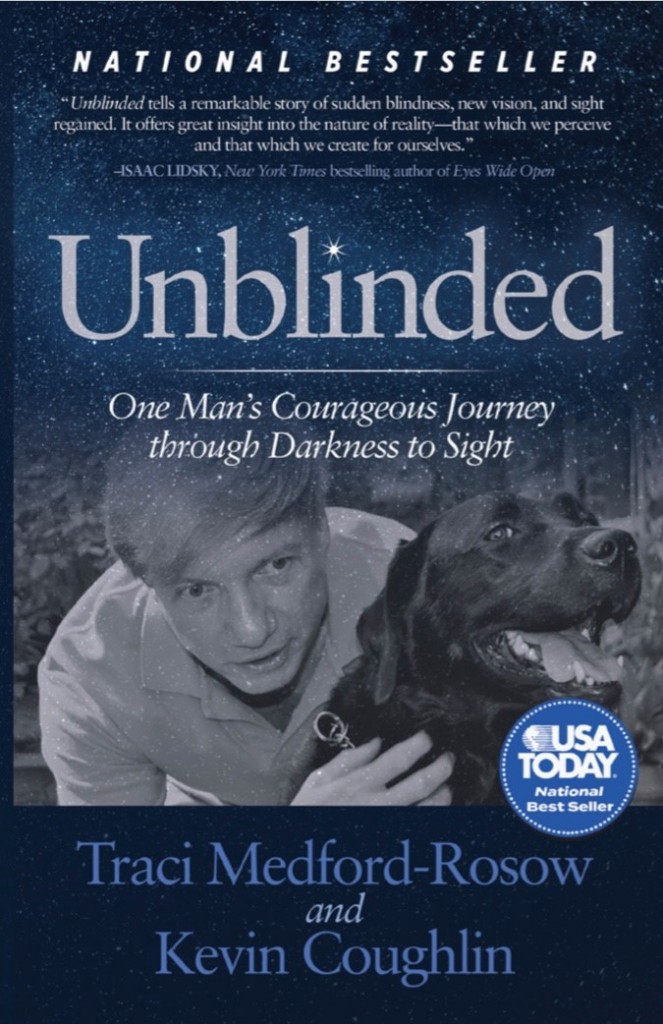 In Unblinded, Traci details Kevin’s story about becoming blind at the age of 36 with LHON.  It not only showcases his struggles with suddenly becoming blind, but his descent into other dark places, including alcoholism.  Miraculously, after 20 years of battling blindness, Kevin’s vision began to return.  He is the only  person in the world who regained their vision spontaneously and non-medically assisted through the regeneration of his optic nerve.  Traci calls it a miracle story that showcases triumph over adversity. The book became a USA Today best seller the first week it was released.   “At the end of the day, at its core, it’s simply a story about hope.  And I think we need those stories now more than ever,” she said.

“Writing a book was never on my bucket list,” Traci said.  Currently, she is a partner in the New York City law firm Richardson & Rosow. Previously, she was with Pfizer for thirty years as Senior Vice President and Chief Intellectual Property Counsel, Global Head of IP Litigation and General Counsel of Europe.  Experiences there led her to write “Inflection Point”, which chronicles the true story of Traci, her legal team at Pfizer and the multi-million dollar battle to protect the company’s most prized asset, the drug Lipitor.

Traci and Joel live about two blocks away from Kevin, and they remain in constant contact with him.  He continues to do well, and his sight continues to improve on a monthly basis.  Traci came to know more about LHON through Lissa Poincenot, UMDF’s LHON Ambassador.  Traci generously donates 100% of her author proceeds from Unblinded to the UMDF LHON Project Fund.  Despite her busy legal career, she continues to write and is currently working on a memoir about her mother.

Watch the You Tube Video below about the book